Of course first discussions were impossible without coffee. Or was it beer? There is nothing that hurts a working relationship like a non existend human relationship between A-team heroes. Khm. And then we had another drink. Or was it two. Which by now counts as tree. Damn. This art thing is getting out of control. No no no. Stop. It wasn’t like that at all. AT ALL! First working meeting was like that: 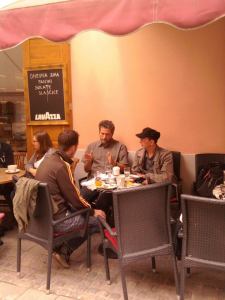 See? No beer on the table. I’m not even shure about the coffee. But i’m shure about the discussion. It was realy lively and first ideas were thrown onto the drawing board. Not blackboard on the wall, behind the A-teamsters. The idea of the project was realy simple. It  was how to transmit an idea to the people. Heiko insisted, that this idea must be a simple positive message, basing on a personal or even intimate approach. The message should be availible for people to see in their everday activities, on their usual paths, when their minds are completely taken by everday thoughts on work, children, school, shoping, football, sex, saving the world or similar. You get it, don’t you. And this message, whatever it will be, was to be transmited through a media which is usually taken by strictly commercial messages. We wanted to take the people by surprise, but this time with a good one, a positive one. One that let them think simple, usefull and positive thoughts. Thoughts that would lead them to act, to action on a personal level. We didn’t want to hit them with a sledgehammer on the head, we wanted their burning harts lead their mind, feet and hands into action. I’m a writing to zealot? Well, maybe. But this was the mood and the feeling Slovenian A-teamsters developed. Well, we were quite satisfied, whene got to this point as the next photos clearly show. 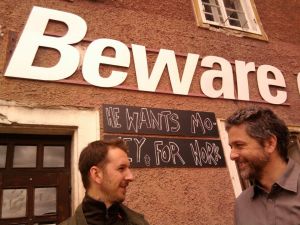 And the we had to get our fingers dirty. With pleasure, yes please. Next step was to decide which media is worth our intervention and what to communicate. It had to be in the inner city, close to the usuall paths people walk, drive, skate, run, crawl, fly … And it shouldn’t be visually complicated, saturated or invasive. Visuals should be clear and simple. Texts should be short and striking, short slogans or even words only. Strong words, food for thoughfts. For today and tomorrow.

It took some more nice meetings, coffee and cigarettes to come up with a complete and worked out idea. Pictures of these meeting are lost and hence history and science will have to live without them. Oh, what a pity.

To put it short, Heiko made a list of slogans and keywords, he even let us (the two Borut’s) do our picks. In a few days of email communication we ended up with a list of about 100 and something words and slogans. Borut W did some research on locations and prizes of billboards, Borut O did also something, but by now he can’t remember what it was. As Heiko was doing his text part in German, the two B’s translated it into native language.

So by now we had it all together.

Go tell the women that we are leaving.