During the first round of artists talks at the Floating Art Gallery BETANOVUSS, all artists met for the first time together, since on 1 June, the opening day, the last two artists arrived: Doris Neidl (Austria) and Cristiano Berti (Italy) and together with Doron Polak and Eitan Vitkon (both Israel), Felice Hapetzeder (Sweden), the US artists Shelley Jordon, Ben Neufeld and Jay Needham and my person, Wilfried Agricola de Cologne, the invited and attending artists were complete. This first round of talks had the meaning, that all artists introduce themselves to each other and the audience.

The first artist who gave an introduction in his work “Origin On Re-cut Trailer, 2009, 7:02″included in the Shoah Film Collection was Felice Hapetzeder. The work included in Shoah Film Collection is a mono channel version of a duo channel installation. In his film, he interviewed a young couple living in Sweden these days, he a of German/Polish origin and she a Jewish talking about the problems of the partnership. Statements like she felt sometimes like a Nazi whore showed not only how mixed her feelings for her partner were, but initiated also an intensive discussion among the audience. While some people showed their understanding for feeling such humiliated, other responses meant such a statement would be incredible, they doubted, generally, that anybody might have such feelings nowadays. In order explain more in detail how he is working as a videomaker, whose basic topic is dealing with identity and memory, he presented a short version of a longer film, dealing with the ambiguous feelings against Onkel Kurti, an authoritarian figure in his life. Felice uses a certain cut in editing his films, which gives the viewer a new freedom for interpreting.
View his film “Origin On Re-cut Trailer”

He completed this first session by pointing in short to two motion pictures:

A Baltic Tragedy (Baltutlämningen, Johan Bergenstråhle, Sweden 1970) and I Remember Everything, Richard (Akmens un Šķembas, Rolands Kalniņš, Latvia 1966).
The movies both deal with the aftermath of war and it’s complications including strategies of nations and human dilemmas of guilt and tragedy.
The films are important but seldom shown. They each represent an important artistic response to the theme of the Holocaust and it’s aftermath. Showing them would involve a degree of research, contacting archives and requesting copies for display. The films describe national trauma linked to the issue of Holocaust.

Baltutlämningen – During the first weeks of May 1945, large numbers of Latvian legionary soldiers went to Sweden for internment rather than to be prisoners-of-war to the Russians. The film is based on the Swedish extradition of Baltic soldiers to the Soviet Union that took place between 1945 and 1946, one of the biggest Swedish political scandals of modern times. The former soldiers were all summarily sentenced as war criminals and sent to camps.

Akmens un Šķembas – “Remarkably, while produced during the Soviet period and being full of Soviet propaganda clichés, the film rather objectively describes the events surrounding participation of Latvian Legion in battles against Soviets on the Leningrad Front during World War II. This sharply contrasts the current official stance of the Russian Federation, which uses the Legion issue to assert political and ideological pressure on Latvia on international scene.” Wikipedia.
“A film with dramatic fate: it was banned several times, cut and reedited, its title was changed three times and still it belongs to the most significant artistic evidences about history of Latvian nation. Screenwriter’s Viktors Lorencs and his generation’s deeply personal fate in the film is depicted through the life story of three friends. (…) The Second World War in Latvia meant also fight on both sides of a front, war – brother against brother and friend against friend.”
From www.latfilma.lv Latvian film.
Preview (Latvian without subtitles): http://www.youtube.com/watch?v=7Pn5p149aCc

After Felice Hapetzeder’s comprehensive introduction, it was the turn to Doron Polak, Israeli performance artist who spotlighted the creative principle of his performances. He explained that the image mean everything to him, whenever it is possible he is taking photographs also as an evenidence for himself where he has been, that nothing is forgotten. Taking photos is part of his memory stimulating every moment his imagination. The preparations for Riga started already before he knew, that he would be invited to Riga for performing.

The performance in Riga in the context of the “Private View”, just a few hours before the artists talks can be seen as an intermediate result of a process which started much earlier, dealing with his fathers diary about his time in the Riga Ghetto, which he intensified after I had invited him to perform in Riga, causing a wide range of artistic performative activities, which were leading to the artistic output in form of experimental photographs currently exhibited at the Floating Art Gallery NOASS, but for him as an artist actually the precisely prepared visit at the Rumbula Forest close to Riga, his performance in the context of this memorial site when 1941 on just 2 days more tha 25 000 Jews were exterminated, and the artistic recordings by Eitan Vitkon draw all his attention, and being personally present documenting the double intervention by visiting the memorial site of Rumbula Forest and at the same time being involved in the artistic process of performative manifestations of Doron Polak and his photographic counterpart Eitan Vitkon, belong also to the artist talks due to the ongoing discussions with both artists on the way to Rumbula, the artistic manifestations in the forest and the return to Riga.

Doron showed photos of different places, like Paris or Prague, where he was working on the ideas which he was executing only in Riga. I met Doron physically for the first time in Riga, but virtually we are collaborating already since many years. Via his artistic project “The International Artist’s Museum”, works of mine were several time included in the Venice Biennale (2003, 2005, 2009). Having Doron here in Riga performing in person had a very special meaning to me. He does not need to be invited to talk about his visions of being himself through his being Jewish, he sees it as his mission to give the listeners all that background information which he feel is needed for a substantial understanding.
His work “RED“, 2008, 30:00, included in Shoah Film Collection can be reviewed here. 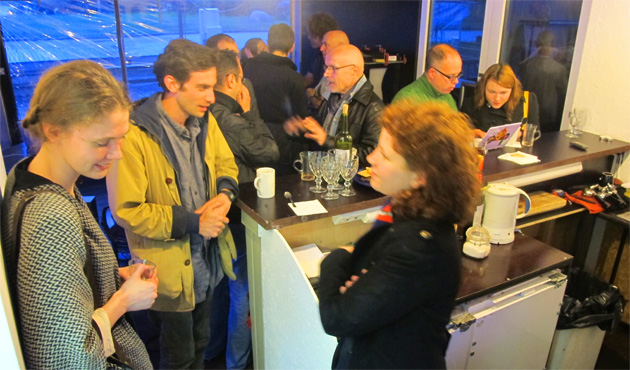 Since the temperature was very low this evening, and the forum of artists and visitors was already icecold, we continued our talks in the cafe bar of NOASS.

At the end of this very long opening day of 1 June, the artists talks presented another artistic highlight, die Israeli art photographer Eitan Vitkon. He is actually not part of the Shoah Film Collection, but his photographs are part of the exhibitions which are again part of the commemorative interventions, and above all, his current photographic work is dedicated to the collaboration with Doron Polak using an extraordinary photographic technique for making out of the documenting photos art works of their own. So, during his talk he explained his principles of photography in movement, among others, showing when he started with photography and the time based component as we know that only from the moving images. It seemed to be hardly to accept, that the technical principle of multi-exposers were leading to such extraordinary visual effects by using just a photo camera without any digital digital manipulation. On 2 June, during the photo sessions with Doron Polak in the Rumbula Forest, I slowly understood only how precise and with how much imagination this Israeli artist was using these exceptional photographic techniques, which also manifest themselves in the beautiful exhibition complementing Shoah Film Collection. So, his talks did not only gave us really profound background information about the technological aspects of his photographs included in the exhibition in Riga, but also in the common work of both Israeli artists. His presentation was really a very strong performance, enforcing the audience to ask for more information, so that the day of the opening came only slowly to an end very late in the evening by screening the scheduled videoart programs.